Warts and verrucae are common and patients may often come into the pharmacy looking for advice on how to treat them.

They are both caused by the Human Papilloma Virus (HPV). Certain types of HPV have an affinity for certain body locations eg hands, face, anogenital region and feet.

Spontaneous resolution is seen in 30% of people within six months and two thirds of cases within two years.

Children are mostly affected, with a peak incidence between 12 and 16 years old. Warts and verrucae are uncommon in infants and the elderly. Front line pharmacy staff should be made aware of referral, should an elderly patient present in the pharmacy.

Warts and verrucae are transmitted by direct skin-to-skin contact, although contact with an infected person’s shed skin can also transmit the virus. Maceration of the skin with roughened surfaces – such as in swimming pools and communal changing areas – stimulates basal cell division to produce the characteristic lesion. Children should be warned not to pick, bite or scratch warts. Most will disappear within six months to two years

Arriving at a differential diagnosis

Warts and verrucas are not difficult to diagnose in the pharmacy. However, pharmacists must be able to recognise other similar conditions that look like warts and verrucae.

Referral to another healthcare professional should be made in the following cases:

Clinical features of warts and verrucas

Warts tend to be rough textured, skin colour and usually less than 1cm in diameter.

They occur on the backs of hands and fingers and knees, either singly or in crops. They may also appear as a raised hyperkeratotic papule with thrombosed black vessels often visible as black dots with in the wart.

Plantar warts are found on the weight bearing areas of the sole and heel (verrucae).

Their appearance is different from the rest of the body owing to constant pressure imparted to the sole of the foot, causing the lesion to be pushed inwards.

Pressure of the nerve pain causes considerable pain and patients often complain of pain when walking. Tiny black dots that characterise verrucas are the thrombosed capillaries. This may not be visible until the hardened skin is shed away. They are distinguishable from corns as they have a whitened appearance and remain soft.

Corns appear as hard corns (top of toes) or soft corns (between toes). Callouses appear as flattened, yellow white thickened skin and are common on the balls of the foot. Like warts, they are 1cm in diameter and can occur singly or in crops

Most pharmacies now have a consultation room. These should be utilised for performing examinations, allowing the patient to feel at ease, reduce embarrassment at the counter and make it more comfortable to remove clothing, if this is necessary.

Examinations can be performed in the consulting room without the need for any specialised equipment, however on occasions a magnifying glass may be useful.

Distribution of warts is generally asymmetric, and lesions are often clustered or may appear in a linear configuration due to scratching. 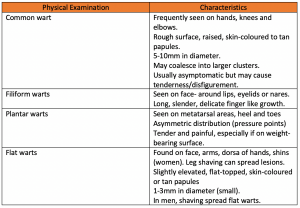 This is usually a first line treatment and is a daily application. Salicylic acid is often combined with other ingredients, in particular lactic acid.

Poor methodology is the reason why treatment sometimes fails. Compliance with treatment has also been identified as a limiting factor in the cure rate for warts and verrucae.

The affected area should be hydrated first by soaking in warm water for five minutes before application of a product containing salicylic acid.

It is very important in the management of warts and verrucae that good skin is protected. This can be achieved by applying petroleum jelly eg Vaseline on the surrounding skin followed by application of treatment on wart or verrucae.

It is also important that before each application of treatment that the wart or verrucae is filed down otherwise the application will only dissolve the previous layer of skin underneath.

Salicylic acid is a keratolytic (peeling agent) and has an antimicrobial effect. It is available in a collodion formula that forms a waterproof barrier and neglects the need for a plaster or verruca socks. 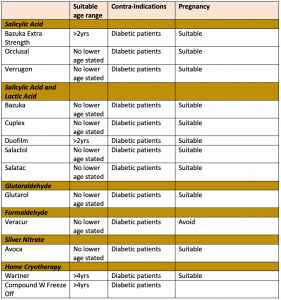 Used for the treatment of verrucae.

Formaldehyde is an irritant so is less suitable on hands. However, the thickened layer of skin on feet protects against this irritant. It is a gel formula.

Used for treatment of verrucae.

Glutaraldehyde should be used twice daily.

It is available in 5% and 10% percent strengths. It should not be used for anogenital warts only verrucae. It stains skin brown, although this is reversible.

Patients can cover the wart with waterproof tape. They should leave the tape on for six days and then soak, pare with emery board and leave uncovered overnight, then reapply cyclically for eight cycles.

The tape is used for up to six days, after which the wart is soaked in warm water and abraded with emery board. Treatment takes up to eight weeks.

Best for warts on hands also safe for use during pregnancy and breastfeeding.

Cryotherapy has been used for several years and it used to freeze the wart. OTC products, marketed as home cryotherapy treatments ,are available for home use. Hence, they are less effective than liquid nitrogen, which is usually left for the GP rather than the patient due to the destructive action on skin.

Suitable for adults and children four years old and over. The wart normally falls off about 10 days after application.

Tip of the applicator must first be moistened and then applied to the wart or verruca for up to one to two minutes, then repeat after 24 hours.

Like other treatment the process is destructive and the surrounding skin should be protected.

At least seven weeks and up to three months of continuous treatment is needed for both warts and verrucae. An invitation back to see the pharmacist and report progress can help monitor the treatment. If unresolved after three months, referral for liquid nitrogen may be needed.

Since the closure of many in-house chiropody clinics within GP surgeries and the lack of high street chiropody centres, community pharmacists should embrace this opportunity as a private service.

Al Patel is a community pharmacy contractor and independent prescriber

Please add your comment in the box below. You can include links, but HTML is not permitted. Please note that comments are not moderated before publication and the views expressed are those of the user and do not reflect the views of The Pharmacist. Remember that submission of comments is governed by our Terms and Conditions. You can also read our full guidelines on article comments here – but please be aware that you are legally liable for any libellous or offensive comments that you make. If you have a complaint about a comment or are concerned that a comment breaches our terms and conditions, please use the ‘Report this comment’ function to alert our web team.

CPCS: 'We help people who then know that they can come back for other things'

Health clinic: It helps us build 'lifelong relationships' with patients

1
Pharmacists given right to sign off fit notes from next month
2
Pharmacist struck off for selling zolpidem on black market
3
Private phlebotomy service: We've had a great response
4
LloydsPharmacy to offer 30-minute delivery service in 150 stores