You’re 17 and it’s time to choose the direction your life will take. ‘You love science, why not apply to study pharmacy at university?’ your parents say. A quick Google search later and you’re looking at the top results for ‘pharmacy’. Branch closures, stock shortages, burnout. Your heart sinks and you move onto the next option. It shouldn’t be surprising that this is the reality for many bright young prospective pharmacists. Indeed, the number of applications to study pharmacy degrees has seen a dramatic decline since 2011. 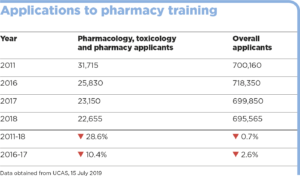 Data obtained from the Universities and Colleges Admissions Service (UCAS) show that applications for pharmacy-related courses dropped steadily by over a quarter (28.6%) between 2011 and 2018. Between 2016 and 2017 alone, applications  fell by 10.4%. While some have attributed this to an overall decline in university applications across the board, a closer look at the UCAS data reveals a different story. But what does a drop in pharmacy students mean for the rest of the sector? And what can be done to tempt the dwindling number of pharmacy graduates into community roles and away from general practice?

‘The job market was flooded’

For Chris Mulimba, superintendent pharmacist at The Riverside Pharmacy in Sleaford, Lincolnshire, a fall in applications is good news. ‘The job market was flooded and that led to the value of pharmacists falling,’ he says. ‘I used to run a locum agency and in 2000 we paid locums £25 per hour. Now they’re getting £19 – it doesn’t make sense.’ Just a few years ago, many shared this view. Responses to the 2013 consultation ‘ensuring a sustainable supply of pharmacy graduates’ showed that the sector was strongly in favour of a cap on pharmacy
places. While the Government ultimately chose to disregard this and a cap was not imposed, it seems applications have nosedived regardless.

However, the Government’s new focus on so-called ‘clinical’ pharmacists in general practice – and the crippled state of the community sector itself – changes everything. More pharmacists than ever are needed  to deliver the Government’s ambitions for primary care, with pharmacists set to work collaboratively in nationwide groups of GP practices serving 30-50,000 patients known as primary care networks (PCNs).

NHS England has said that by 2023/24, up to six whole-time-equivalent (WTE) clinical pharmacists could be working for each PCN. Some 1,259 PCNs were set to go live at the beginning of July, according to NHS England’s latest figures, which means that practices will be on the prowl to recruit around 7,000 pharmacists.

The number of pharmacists working in general practice has already increased by almost 40% since last year, according to NHS Digital. Meanwhile, a major survey of primary care workers by The Pharmacist’s publisher Cogora revealed earlier this year that just under a third of community pharmacists are considering packing up and moving into GP practices.

An exodus into general practice

Growth in the number of pharmacists on the register has stalled. General Pharmaceutical Council (GPhC) figures show a 4.1% increase between 1 January 2016 and 1 January 2017 slowing down to 2.2% in 2018 and 1.9% in 2019. In this climate, there are widespread concerns about an exodus of community pharmacists into general practice.

Contractor George Romanes, who owns pharmacies on the Scottish border, told The Pharmacist that GP practices are taking valuable pharmacists away from community settings in Scotland, while Mark Donaghy, professional development manager at the Kamsons national pharmacy chain, told delegates at the NPA conference in June that migration into practices is making recruitment of community pharmacists ‘incredibly difficult’.

Evidence recently submitted by Boots, the National Pharmacy Association (NPA) and the Royal Pharmaceutical Society (RPS) to the Migration Advisory Committee (MAC) adds to the chorus of concerned voices. The MAC was investigating whether pharmacists should be added to the shortage occupation list (SOL), which helps employers hire migrants into listed roles – but the profession was ultimately not included.

Factors contributing to the shortage include the long, unsociable hours community pharmacists have to endure, decreasing applications from EU citizens since the 2016 Brexit referendum and acute recruitment challenges in rural areas. And the loss of pharmacists to GP practices was another common theme.

One community pharmacy chain based in Lincolnshire, Humberside, North Yorkshire and East Anglia told the RPS anonymously: ‘We see no evidence of the over-supply in our area. We advertise for positions and are lucky to get a response – never mind a choice.’

The pharmacy chain had worked with the University of Lincoln to establish the only MPharm course in the East of England between Durham and Norwich, but this had little effect on recruitment problems. Most students who carried out community placements there took offers of hospital and practice-based roles, the chain’s spokesperson said. ‘Community pharmacy is seen as the poor relation,’ they added. ‘We are taking part in the upcoming split pre-reg pilots and I would like to see young pharmacists taking up split employment across community pharmacy and GP practices. However, I suspect they will disappear to GP world.’

‘A future pipeline of pharmacists’

If practice pharmacists are going to add capacity rather than simply shifting the centre of gravity, more pharmacists will be needed after all. But how can more students be encouraged into the sector? The foundation year has been ‘one glimmer of hope’ in attracting pharmacy technicians to the MPharm, the Lincolnshire chain added, suggesting a similar degree apprenticeship could provide ‘a future pipeline of pharmacists’.

Recent plans to introduce an apprenticeship route into the pharmacy profession, now shelved until further notice, have stirred up a lot of controversy in the sector. The chain Well, one of the employers that made the proposal, said it was exploring the five-year apprenticeship scheme in response to declining university applications. However, the Pharmacy Schools Council (PhSC) chair Nigel Ratcliffe told The Pharmacist he is ‘not aware’ that the apprenticeship was designed to solve  a shortage of pharmacists, although it could be one way of doing so.

While the number of students admitted  to pharmacy schools has remained largely consistent over the last half-decade, NPA policy manager Helga Mangion says most pharmacy schools went through clearing – the process that matches applicants who do not meet their university offers with places that are yet to be filled – last year. The decline in applications should lead  us to question whether the degree is still equipping people for roles in pharmacy as  it used to, Mr Ratcliffe adds.

As for the pharmacy apprenticeship proposal, it is beginning to garner tentative support. ‘Many colleagues didn’t feel that it was  the right direction for the profession but let’s hear the ideas,’ says Bristol contractor Ade Williams. ‘There could still be good ideas that can be incorporated into degree models.’

An apprenticeship could widen access to students who find the cost of a degree prohibits them from joining the profession, Ms Mangion adds. However, RPS director for education and professional development Gail Fleming warns that an apprenticeship alone would not reverse the fall in applications and that competition from the expanding number of medical schools will put further pressure on pharmacy schools in the future.

Even if we cannot formally declare  a shortage of pharmacists yet, the loss of appetite among students, the unknown effect of Brexit and the trend towards practice-based pharmacy could create  a perfect storm. So what can be done to entice more people into the community sector?

South London contractor and NPA board member Reena Barai says it’s up to community pharmacy itself to counter the pull of shiny new roles in general practice.  ‘As an employer, it’s my duty to make the jobs I offer to people more exciting,’ she says.

Mr Williams agrees that championing the achievements and potential of community pharmacy is crucial. ‘A continuous spate of really discouraging news, such as funding cuts and closures, affects the psyche of those that are in the sector, and stops us attracting the brightest, the most ambitious and the best to come and join us,’ he says.

Even more important is a contract that will empower community pharmacies to deliver innovative, well-funded clinical services and make them a more attractive place to work. Time will tell whether the new contract delivers. ‘These are defining times and the decisions made now will affect community pharmacy for years to come,’ Mr Williams adds.

Everyone is currently deciphering the contract, but in the meantime, the sector must rally its troops to win itself the image boost it needs. A few years ago, we waged war on the funding cuts, but maybe we have been fighting the wrong battle all along.

Please add your comment in the box below. You can include links, but HTML is not permitted. Please note that comments are not moderated before publication and the views expressed are those of the user and do not reflect the views of The Pharmacist. Remember that submission of comments is governed by our Terms and Conditions. You can also read our full guidelines on article comments here – but please be aware that you are legally liable for any libellous or offensive comments that you make. If you have a complaint about a comment or are concerned that a comment breaches our terms and conditions, please use the ‘Report this comment’ function to alert our web team.